My second grandson was born almost two weeks ago. He was born under unique circumstances. My son-in-law is deployed to another continent with the United States Army. Since he was not available for the birth of his son, my wife and younger daughter filled in as birthing coaches for my older daughter. On the day of the delivery my one daughter drove her pregnant sister to the hospital while my wife wrapped up her work two hours away and began her journey. I baby-sat my first grandson while the women gathered in the hospital room.

It was late when I learned of my new grandson’s arrival. My younger daughter gave me the news, first through texting, and then in person. It was the next day that I got to see the new little boy. It was several days before I learned that his umbilical cord was cut not by the medical staff but by my daughter. She was given the honor of cutting the cord between her sister and nephew before the baby was wrapped and placed in his mother’s arms.

And so, the umbilical cord was cut, but the second connection between mother and child, breast bonding, began. The miracle of birth certainly is always sacred. Maybe I am just sentimental, but it seems to me that there is something even more sacred about having two Christian ministers attending the birth, cutting the cord, and placing the baby on his mother’s breast. I know it is not practical, but how wonderful it would be if every one of the births in our congregations was attended by Christian women ministers who did these sacred acts. Representatives of God cutting the cord for a faithful mother; what a Godly dream this is.

To read more of Pastor Mark’s writings, please order a copy of his book: 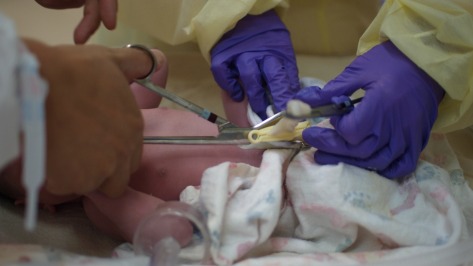